The COVID-19 pandemic has changed the lives of a multitude of people. And in the past few months, the world has undergone a number of crisis episodes. In this series, we use the Step Change creativity tool to show how some of history’s greatest strategists might apply their strategies to the current crisis. The strategist for the day is Bill Gates.

Bill Gates is many things. He is a technological genius, industry giant, philanthropist. He is well known for having predicted the COVID-19 crisis during his 25th TED talk. In that talk, he stated that the greatest threat to humanity is not from nuclear war, but a pandemic. He also said that a pandemic is the greatest threat to humanity's progress as a species. And as we now know, his prediction came true. The COVID-19 crisis struck, and within a few months, the human race is now facing a global pandemic.

He had the foresight to warn us of a coming pandemic. Today he is working to halt it through his various philanthropy works. Let’s take a look at some of his achievements and how his strategies could help us overcome the COVID-19 crisis.

(Provides the software that runs the world)

As a way to look deeper into Bill Gates’ psyche, we took the time to book a virtual interview with him. Here is a short (and imaginary) interview between historian Chris Bishop and Bill Gates.

Chris Bishop (CB): To start off, please describe one of your greatest achievements?

Bill Gates (BG): There have of course been many major achievements in my career. However, the one I like to think of as one of the greatest was the deal we did with IBM in 1980.

I heard on the grapevine that IBM (giant of the computing world at that time) was struggling to perfect its operating system for the release of its first personal computer.

I approached IBM and offered to create an operating system on their behalf. We had no such operating system, so we went out and brought an existing system and reconfigured it to the needs of IBM. We then presented them with PC-DOS.

We then sold it to them at a modest profit while retaining the licence. This proved a win for us as the IBM computer was successful, which enhanced our reputation while we were able to go to market with MS-DOS which was a market success.

CB: The rivalry between Steve Jobs and you is well known. Give us your take on it?

BG: I think the rivalry between Microsoft and Apple was not as great as people think. However, what there was of it was good as it helped drive the progress of the technical revolution. Steve always saw the computer as a means of expressing individual creativity, I always saw it as a driver of industry and commerce. It is well known that we fell out over the release of windows where Steve believed we stole Apple’s interface. However, the world has proved big enough for both companies to thrive

CB: How would you describe the strategy that Microsoft used under your leadership to achieve the dominant market position that it has?

CB: You are renowned for your philanthropic endeavours. Would you like to give us an insight into this pursuit?

BG: Melinda and I set up the Bill and Melinda Gates Foundation in 2000. We have had many opportunities to assist charitable organisations and scientific research programs. Melinda and I are committed to do all we can to assist in supporting initiatives that contribute now and, in the future, in making this world a better place.

CB: Do you have any final words of advice for our readers?

BG: Firstly innovation is the key. It continues at a scarily fast pace. If you are not innovating you are dying on the vine.

Secondly, those companies that rely on their intellectual property to carry them through are doomed. IP nowadays has the shelf life of a banana.

Finally, I believe that discrimination has many layers. This makes it extremely difficult for minorities to progress through structures in society.

This is not only morally wrong but it is bad for the economies of countries where it is embedded.

How Would He Handle the COVID-19 Crisis?

A key factor in Bill Gate’s success is that he identified the inefficiencies of the technology of the time. Saw its limitations and set out to create a better version of the software.

During the current times of uncertainty, there is a need for innovation. Depending on the industry they are working in, leaders should identify key elements that they could improve.

One of the riskiest business moves that Bill Gates ever made was when he made a deal with IBM, giving them permission to use his software. The only problem was, it was not built yet. And if he was not able to deliver on his end, the whole deal would have collapsed.

Microsoft’s standard became the industry standard. Microsoft paved the way to success by being the first to market in the software and by agreeing to deals which ensured the rapid success of the Microsoft product.

The COVID-19 pandemic is a time of crisis for some, and a time of opportunities for others. Bill Gates took the lead and took calculated risks in innovation. Companies that succeed in innovation and adapting to the new environment will succeed while others that fail to innovate and adapt will not survive,

If you want to learn more about how Bill Gates would have handled the COVID-19 Crisis click here. 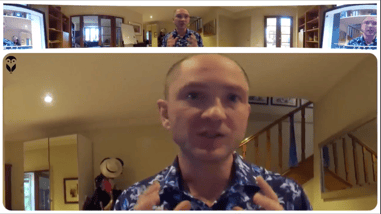